Years ago there was talk of "commercial agent" to refer to those who promoted the sale of products with "diesel and the bag". These were the days when the agent filled out paper forms with the customer in three copies, then sent the order to the principal, with all the specifications (quantity, unit prices, total price, return conditions, discounts, etc ...). Today, in times of tablet and e-commerce, much of that activity retains its importance, especially when human contact and product knowledge continues to play a significant role in customer-supplier.

Sometimes the leading companies do not choose a person as their "agent"; they prefer in an initial phase to call it (or treat it as a) occasional collaborator. The intent is clear: we do not call this person with his formal "name": it is actually a subject that brings the principal a contractual proposal, only that he does it - at least in a first phase - without continuity. Thus, without being aware of it, there is the risk of establishing an indefinite agency relationship, which, if the agent operates abroad, could present significant unknowns in terms of the applicable law. The Business Planner. What is internationally called "occasional intermediary" is in our terminology called "procacciatore" or "procacciatore d'affari". It is a figure that is not defined by the rules of the civil code, nor by the EU directive on agents, but is the result of the jurisprudential elaboration. According to the Court of Cassation, a procurer is present when a subject, while operating as an agent, does not have a "continuous" relationship with a leading figure, but on the contrary it is a relationship characterized by "occasionality.

Article 1751 of the Italian civil code

It can happen that a company realizes the real total cost of an agent when it ceases its relationship. In these cases, both in Italy and in the EU, an indemnity for termination is due to the agent who - pursuant to art. 17 of the EU directive on agents - may result in very significant disbursements. In our system the directive has been implemented with a modification of the art. 1751 of the Civil Code setting the limit of one year of commissions, calculated on the average of the last five, the maximum threshold which, however, is often easily reached in the practical application of this (contested) standard. In this scenario, a good contract must provide for the application of the law most favorable to the principal - as far as possible - and to establish that the basis for calculating the indemnity in favor of the agent is limited to the minimum mandatory. Even in such cases a good contract can not work miracles, but helps to reach a balanced solution. 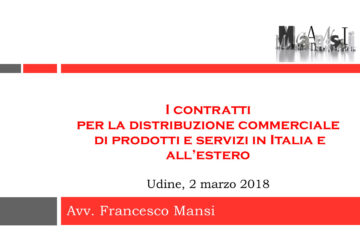 Contracts for commercial distribution – slides of the meeting 5 March 2018

Contracts for commercial distribution – a seminar on March 2nd 2018

All fields are mandatory